Parkinson’s disease isn’t like a flood. You won’t wake up one day, suddenly experiencing every symptom.

Instead, symptoms of Parkinson’s come on slowly. Like the drip of a faucet, they may not be noticeable at first, but, because Parkinson’s is a progressive disease, patients will find that their symptoms increase over time.

If you or someone you know is at risk for Parkinson’s disease, it’s best to stay informed and watch for early signs and symptoms of the disease.

Though it’s impossible to guess just how Parkinson’s will affect you or your loved one, research on the disease and its possible symptoms can help you feel prepared for whatever is to come. 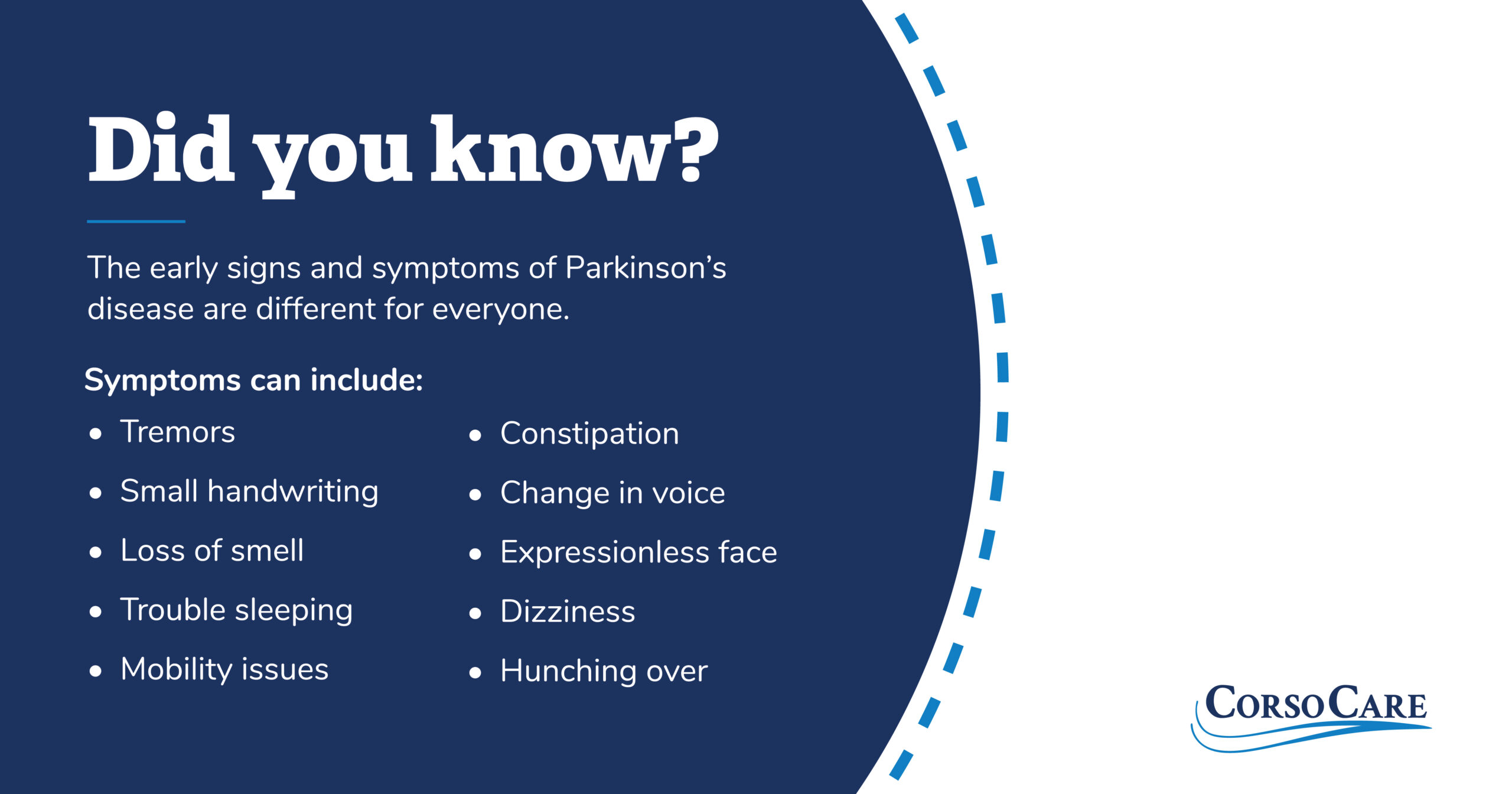 The early signs and symptoms of Parkinson’s disease are different for everyone.

Here’s a closer look at how these common Parkinson’s disease symptoms can present themselves:

Tremors often begin in a person’s hand, but it’s different for everyone. Eventually these tremors can affect both sides of the body, and they may also occur in the jaw, chin, mouth or tongue.

A sudden change in the size of your handwriting may be an indicator of Parkinson’s disease. Changes in the brain can make fine motor skills like writing more difficult, so someone with Parkinson’s may notice their script is smaller and more crowded together than usual.

A reduced sense of smell, called hyposmia, is often one of the earliest signs of Parkinson’s. A patient may note that their sense of smell has “weakened,” or that they can no longer smell certain foods or beverages.

Restlessness, insomnia, vivid dreams and fragmented sleep can all be symptoms of Parkinson’s. A noticeable change in sleep patterns like these can also leave those with Parkinson’s fighting daytime sleepiness or finding it hard to stay awake.

Parkinson’s can also affect mobility. Instability or balance issues be associated with a tendency to step or fall backwards when a person’s balance becomes disrupted. Changes in a person’s walk (gait), postural instability, and lightheadedness are some additional symptoms that may affect mobility.

Some people with Parkinson’s disease may notice they are no longer having consistent bowel movements. Constipation can cause discomfort and even impact the benefit of medication.

Typically, a patient’s voice will become lower or softer as a result of Parkinson’s disease. These speech problems may also include additional trouble speaking, and difficulty chewing or swallowing.

You may notice a reduced or mask-like expression in someone with Parkinson’s. This slowed movement may include a decreased blinking rate and other changes in expression.

Vertigo and dizziness are common symptoms of Parkinson’s. Some patients have reported that they feel dizzy or faint especially when sitting up from a chair.

Parkinson’s affects control of automatic activities, which means the brain is not sending automatic reminders to stand up straight. The lack of these signals can cause rounded shoulders, forward lean or a hunched-over appearance.

Not every symptom of Parkinson’s disease is motor related. In fact, the Parkinson’s Foundation found that mood, depression and anxiety have the greatest impact on health — even more than the motor-related symptoms that are often associated with Parkinson’s.

Why does Parkinson’s effect mental health? Parkinson’s disease is caused by changes in dopamine levels which, in addition to affecting motor function, can affect a person’s mental health. That’s why it’s important to treat both physical and mental symptoms of someone who has been diagnosed with Parkinson’s.

Do I Have Parkinson’s Disease?

The presence of one of these symptoms does not mean you have Parkinson’s disease. Instead, it’s a combination of several symptoms that may lead a doctor to making a diagnosis.

Keep in mind that the risk for developing Parkinson’s increases with age. On average, people usually see early symptoms of the disease and receive a diagnosis around age 60 or older. In addition, men are diagnosed with Parkinson’s more than women.

If you have noticed multiple of these symptoms in yourself or a loved one, consider talking to your doctor about your risk for Parkinson’s disease.

For more information on Parkinson’s disease and how CorsoCare can support you and your loved one, call us at 248-438-8535.